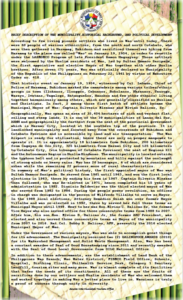 Before the settlement of migrants from Luzon and Visayas, after World War II in the 1940’s, there was a place located at the heart of Mindanao that has been inhabited by native tribe. Early native settlements have dominantly positioned in the area to have their living for their families and followers. Accordingly, the early community identified to have established a settlement in the place, near the creek, called as “Lia Wao”, which means a “high place”.

Lia Wao, the present-day location of the poblacion, known today as “Wao”, was considered as the center of trading activities from nearby communities and other ethnic tribes in some parts of Lanao, Cotabato and Bukidnon provinces. Sources of livelihood among early inhabitants were hunting, farming, raising domesticated animals, weaving and barter trading.

These events characterize the origin of Wao prior to the settlements of migrants from Luzon and Visayas until early period of post-war era in the 1950’s.

During the early 1950’s, settlers from Luzon and Visayas continued to venture their luck in the vast area of Mindanao declared as the “Promise Land”. Because of Wao’s natural resource assets and vast fertile lands suited for agriculture, the national government recognized the potential of the place and made it (Wao) part of the resettlement project in 1950 by then President Elpidio Quirino through Proclamation No. 188 under the Rice and Corn Production Administration (RCPA). In the mid-1950’s, the conception of Wao already started with the defunct Land Settlement Development Corporation (LASEDECO). Since then, Wao became a destination of settlers coming from Luzon and Visayas. The first batch of settlers, known as Pioneers, arrived in Wao on January 19, 1954. This early period of settlement era caused the sprout of the new growth center on the southeastern portion of Lanao province.

In June 18, 1954, then President Ramon Magsaysay signed into law RA 1160 creating the National Resettlement and Rehabilitation Administration (NARRA) with his utmost desire to distribute “land for the landless”. Under NARRA, the Resettlement Program was further strengthened and implemented. In effect, more settlers from Luzon and the Visayas were brought to Mindanao and one of the major destinations was the resettlement project in Wao. Because of this, Wao evolved as a community composed of settlers of various ethnic groups mingling with the Maranao tribe. Thus, Wao became a melting pot of numerous tribes composed of Ivatan, Ilocano, Batangueño, Ilongo, Cebuano, Boholano and other ethnic tribes.

On its early settlement period, Wao was still part of the municipal district of Maguing (now Lumba-Bayabao). On June 15, 1956, Wao became a municipal district when RA 1584 was signed into law creating some municipalities in the Province of Lanao. By virtue of Executive Order No. 418, Wao officially created as a municipality on February 22, 1961 with its first set of appointed local officials, headed by Sultan Mamco Saripada as Mayor. This development paved the way to a more profound development direction as new growth center continue to emerge.

Wao started with 4 barangays, 28 barrios and 12 sitios. The rapid growth of some of its cluster barangays made the sprout of the new town, the municipality of Bumbaran. Despite of this creation, Wao still managed to stabilize its development pace thru the influential leadership of its political icons headed by its Municipal Mayors.

Wao’s first Appointed Mayor was Sultan Mamco Saripada, a Maranao native. Having established very cordial relations with Christian settlers and exhibiting good leadership, he was appointed as Mayor by the Governor of Lanao in 1961. In 1963, his stint as Mayor of Wao was extended until the election in 1967. Silverio Eleazar, a native of Tarlac, was elected into office. Silverio Eleazar served his term from 1971 until 1982. In the 1982 election, Dionisio Baldeviso, Sr. , an Ilongo, was elected to the mayoralty post until 1986 when the Marcos regime ended. This paved to the appointment of Wilfredo Villalba as OIC-Mayor of Wao in 1986. However, the stint of the OIC’s was only short lived. A local election was conducted in 1988. Atty. Remedios G. Guiab was elected Mayor and served until 1998. Elvino C. Balicao Sr. served the mayoralty post from 1998-2007. Following the footstep of his father, Elvino B. Balicao, Jr. elected as Mayor in 2007-2016. Ret. Col. Bobby B. Balicao, AFP, was then elected Mayor and served a term from 2016-2019. His younger brother Elvino B. Balicao, Jr. won over him on the 2019 local election, is the Municipal Mayor of Wao up to the present. 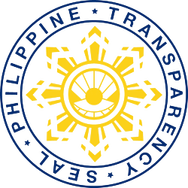